How to size a firewall 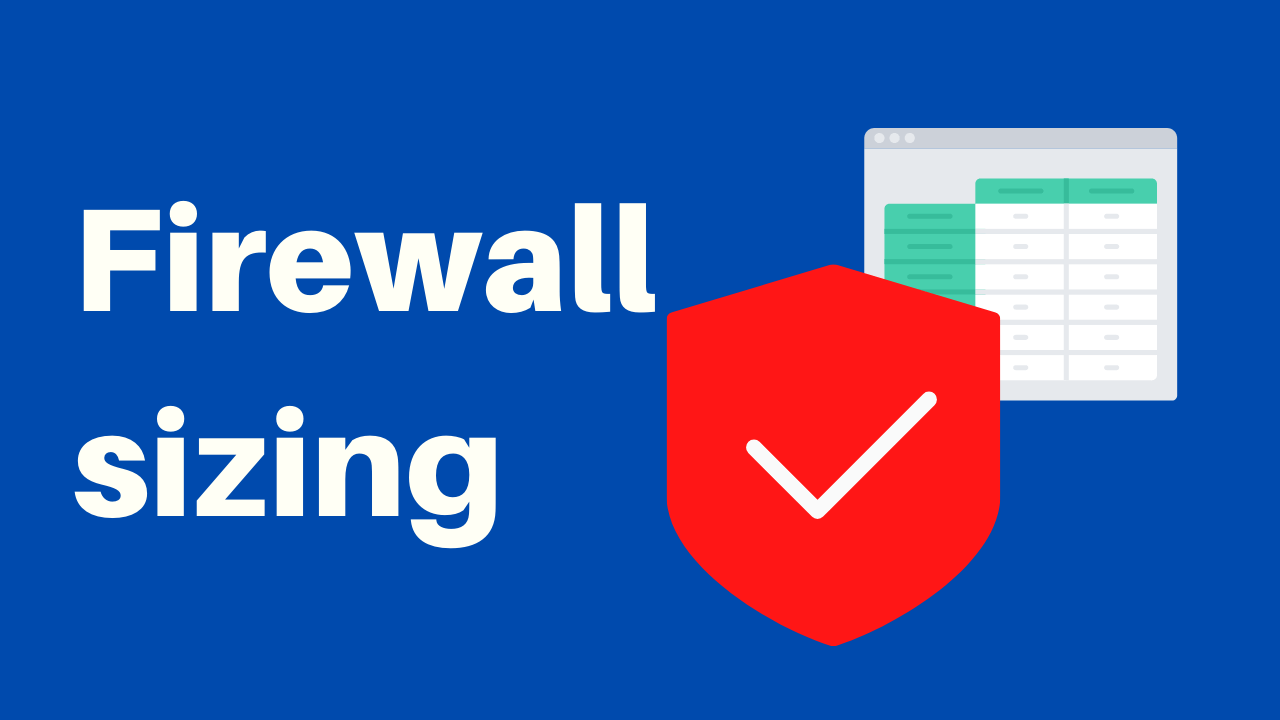 This article was written mainly for pfSense  and OPNsense, but it can also be used for ipFire.

Steps to resize a firewall

Also keep in mind that from version 2.4 pfSense does not support systems on CF anymore (in particular it no longer supports i386 images), which OPNsense still supports them.

By definition, throughput of a communication channel is meant its transmission capacity actually used.

Before considering throughput considerations, we need to consider the fact that both pfSense and OPNsense can operate both as a firewall and as a router or both. It will therefore be necessary to consider the overall throughput of the system we want to achieve for the choice of the apparatus.

For example, if we need to build a firewall, we can consider the sum of the WAN throughputs as throughput.

If instead we have to create a Router that joins networks together we have to sum up the throughput of all the interfaces, both WAN and LAN.

It is important to determine the throughput of a network before installing a pfSense/OPNsense firewall / router as it determines the type of CPU to use and in some cases the type of NIC.

If less than 10 Mbps are required then the minimum hardware requirements can be used. For higher throughputs we strongly advise you to follow the sizing suggested by the following table, based on tests actually performed in the field. The table below is designed to avoid reaching the maximum level of hardware load, so as not to run into problems.

If for example I have to build a Router or a Firewall with 10 Gbit ports, I won’t be able to use a less powerful CPU than a Quad Core XEON. In fact, when the NICs reach 10 Gbit of traffic the Core of the appliance goes to 100% and the machine goes into crisis.

For these uses we recommend A2-Server o A3 Server.

It should be noted that the pfSense development team has announced that as of version 2.5 it will NOT BE MORE POSSIBLE to install and even less to update the versions of pfSense on hardware without CPUs with AES-IN instructions. The reason (always declared by pfSense) is that to support the increase in CPU loads resulting from cryptography it was necessary to use the set of AES-NI instructions that are used to optimize encryption and decryption algorithms on certain processors Intel and AMD.

This does not concern the OPNsense developers who declare that the execution of the AES-IN instructions can be done either via hardware (with CPUs having AES-IN instructions) or via software, as is the case with current versions of both distributions without any particular problems.

2.2 Minimum requirements for pfSense up to 2.4.x

(*) The Power Cluster and APUTM models with Intel I7 CPU have a Medium noise level only if they are subjected to strong and continuous workloads.

VPN: the heavy use of the VPN service greatly increases the CPU requirements. Encryption and decryption of packets increases the load on the CPU. The number of connections is a less troubling factor than throughput.

Squid – Squidguard – outbound proxy traffic control: both packages use a lot of CPU and disk writes. Therefore, it is strongly discouraged to use the Entry level, and Entry Level APU2.
For this type of work it is strongly recommended to use Appliance Small UTM 3, Compact Small UTM 3, A2SUTM, A1-Server, A2-Server, A3-Server or APUTM with SSD or Classic disks.
However, it is also possible to use optimized with only the squid package on  Entry Level APU2 provided that you use the writing on the disk support sparingly and in any case to the detriment of performance.

pfBlockerNg: pfBlockerNG is a package for pfSense® that allows extending the functionality of the firewall beyond the traditional L2 / L3 / L4 firewall. pfBlockerNG allows you to configure the firewall to allow / deny traffic based on elements such as the geo location of an IP address, the domain name (for example to block Facebook and the like) or Alexa’s assessments of certain websites.

This package requires an increase in CPU and RAM from 15% to 25%.

To learn more about this package, you can consult the guide we have created and published in our guide area.

Captive Portal: Environments with hundreds of connections require a lot of CPU. With reference to the throughput table it will be necessary to increase users by 15-20% to get the recommended platform.

Large state tables: Each entry in the state table requires 1 KB. The state table, when full, has 10,000 entries, so about 10 MB of RAM. For larger state tables, with hundreds of thousands of connections it will be necessary to properly size the RAM.

Packages: many packages significantly increase the amount of RAM used. For example, snort and ntop should not be installed on hardware platforms with less than 512 MB of RAM and at least 32 GB of disk.

Version of pfSense®/OPNsense® to be installed

The difference between the two types of installations that can be made with pfSense/OPNsense on different devices should be emphasized.

We remind you that as far as pfSense is concerned, the last version that can be installed on CF (ie the embedded version) is 2.3.5, while for OPNsense the termination of the support is not envisaged.

3. Deepening on the network card chipsets

Choosing a network card is essential for those who are designing a medium / large system.

As you can see from the product descriptions, we always specify very well if the devices integrate Intel or Realtek chipsets internally.

From about mid-2016 onwards virtually all our devices are equipped with Intel chipsets.

The Realtek chipset is less powerful than the Intel chipset and is suitable mainly for less intense workloads. However, for a company that does not require high throughputs (like 85% of Italian companies) it remains the ideal choice.

The Intel chipset, on the other hand, offers greater performance in the event of heavy traffic: in fact, it offers several advanced features such as queue management and, from the pfSense 2.2 version, also improved multi-core support. This results in higher throughput and less CPU load.

To be precise, full support for multicores has been introduced on FreeBSD, that is, by S.O. father of pfSense and OPNsense, so the same argument made for pfSense is valid and will apply to OPNsense in the future.

If you are still using pfSense® 2.1.x, we have published an in-depth study on optimizing Intel NICs by tuning the driver and settings. However, we specify that up to now our appliances do not need such optimization. However, we insert it for completeness.

On the current versions of pfSense/OPNsense it does not seem necessary to make changes.

If you think your appliances have performance problems arising from NICs, you can use this guide to diagnose the problem.

4. Sizing according to the noise of the equipment

To provide the right product, you need to think about where the firewall will be placed.

Lately, due to Intel’s new 25-nanometer technology, the absorbed power has greatly reduced and consequently the dissipated heat has also decreased.

From the design point of view, we preferred to maintain the fan in the high-end models (typically used in data centers or CEDs). This is because, if the board or CPU detects high temperatures, using the fan would bring the temperature back to acceptable levels in a few seconds.

Below is a table showing indicative data on the noise level of the equipment:

Notes on noise::
a device that dissipates heat well, will certainly last longer and will be more stable and reliable!
That’s why our high-end devices are designed in such a way that the airflow “invests” the internal components by cooling them.

One of the functions most appreciated by pfSense CE/OPNsense in terms of hardware reliability is the Raid functionality directly implemented by the FreeBSD operating system.
This function guarantees a higher level of reliability of the application as in the event of a disk failure the application will continue to function as if nothing had happened.
This function is supported by:
Appliance Small UTM 3 /

A3-Server and in all the Cluster versions of our devices except the NanoCluster.
For those wishing to deepen the subject, we published a guide that explains how it works and how to intervene on the equipment in case of failure. You can find it under the guide menu.

6. When should I use a Cluster system?

A Cluster system is a solution composed of a system having two completely independent hardware devices. There are 3 versions of Cluster solutions, one for small offices and the other for heavy traffic and / or medium/large structures.

The Small Cluster and the Power Cluster are 2U devices, consisting of 2 independent drawers, while the NanoCluster is composed of two Entry Level devices.
Using pfSense CE or OPNsense you can get a real passive active Cluster configured to obtain high reliability between the 2 devices that become in effect the cluster nodes.
The others S.O. they do not have (hopefully for now) a function like the CARP of pfSense CE/OPNsense but they can still be configured in such a way that the user can manually switch off one of the two systems and turn on the other. We can therefore say that it is a Cluster system that in the case of pfSense® CE and OPNsense® is automatic and in the case of other S.O. it’s manual. This system should be used in environments where high reliability is mandatory.

The results are linked, for example, to the technological evolution that every company / entity undergoes or requires over the years for different needs. For example, small businesses initially require the installation of a simple firewall. Normally it does not take much time to submit requests such as VPN, content filtering or navigation rules.

For this reason, based on the number of “active devices” (ie devices connected to the Internet) we have elaborated the following table which also takes into account the above concepts:

(*) These measurements were made using the compression hardware module.